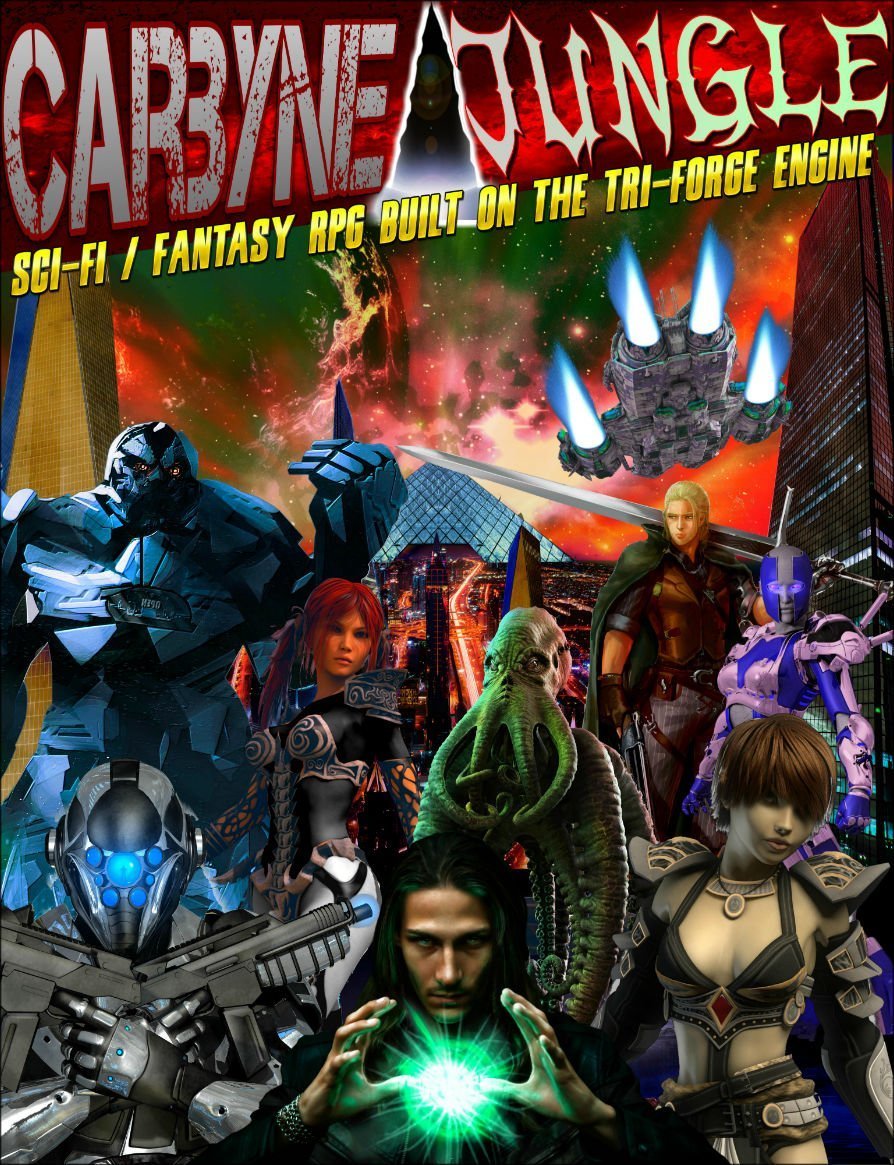 Welcome to the jungle, the Carbyne Jungle! An upcoming RPG published by Nor Cal Mythos Entertainment, Carbyne Jungle is the first setting created for the company’s own Tri-Forge Engine. It’s a beautiful blend of Sci-Fi and Fantasy into a truly unique setting. We were lucky enough to receive a digital sneak-preview of Carbyne Jungle. So, without further adieu; a review!

(Author’s Note: This review is based on the preview, and some changes may be reflected in the final product. )

Carbyne Jungle takes place in a fractured galaxy. What was once a sprawling empire across the stars crumbled, isolating the worlds from each other. Over centuries, these different worlds rebuilt, created new ships and technology, and once again went to the stars. However, when many empires go on expeditions, there will always be conflict.

The lore in this system is absolutely exceptional. It does a remarkable job mixing science and magic to fully encompass the feelings of both Sci-Fi and Fantasy without cheapening either. This is most evident in the careful balance between Primal forces and Quantum Channeling, both bearing a strong resemblance to magic, regardless of the fact that one of them just follows Clarke’s third law. “Any sufficiently advanced technology is indistinguishable from magic.”

Not only is it quality, there’s also quite a bit of it. History, wars, political alliances and enemies, and even the cultures of the galaxy are well-rounded and in depth. It’s fleshed out to the point that any Game Master can easily start a campaign without spending hours creating new locations before the first session, still leaving room to grow.

The Tri-Forge Engine is the system that powers Carbyne Jungle is a true stand-out feature. It’s Stock set of rules is something that will make most seasoned players feel right at home. Where the “Tri” comes from in the title is the fact that there are also two additional rule sets: “Strategic” and “Flip and Fight”.

Strategic is a more in-depth set of rules meant to add additional options the game. For many of the stock rules, you can find alternate Strategic rules peppered throughout the source book. The great part is you are able to cherry-pick these rules and add them to your game to better suit your play style. On the other side, the Flip and Fight rule set is a more basic set of rules found in the back of the book. This is a more streamlined and simpler version aimed at beginners and newcomers. This is focused on a specialized deck of cards, however, as with many other parts of this book, there are alternate rules for a standard set of cards and a D12 as well!

The best part of the system, is that each player can choose to play in a different rule set! If you have a new player, you can set them up as Flip and Fight characters, while the other players use the standard rule set, or even the strategic. When your player wants to graduate from the Flip system to the stock, there is a short conversion section to transition the character over to the stock or Strategic rule set. You don’t have to re-create the character from the ground up!

This is something that Carbyne Jungle does absolutely right. Starting out, there’s a three-page outline with the step-by-step process. Personally, I would photocopy this for my group as they create characters to speed up the process.

Much like the Tri-Forge engine itself, customization is the name of the game with character creation as well. In addition to your race, you will also choose a power source and an archetype, which open up new customization options. Each unlocks different Backgrounds and Attack Options.

Backgrounds are similar to feats in traditional D&D settings, they can help increase certain stats or provide utility moves and special bonuses unique to your character. Attack Options, however, are even more interesting; these provide alternative ways that your character can attack, adding additional functionality. Granting an ally a bonus,  hindering opponents, or even straight-up more damage are all ways that Attack Options can reduce some of the “I Attack” grinding that can happen in some RPG’s.

Of course, I had to save the best part for last! New players to the system may become overwhelmed with all of the options available for the system, but Nor Cal Mythos saw this coming, and planned accordingly! With each step there’s an “If you’re unsure of what to do” section that can help new players to make a decision, or to recommend an easier type of character. This is single-handedly my favorite parts of the book, and honestly, I’d love to see more systems do this.

This product is a full-color, 245 page book, with a one-page character sheet, and table of contents. The book itself is filled with artwork that lends itself well to the feel of the setting, averaging about one piece of art for every other page. It features a two-column layout with distinct header fonts. It also comes with a guide for GM-less games and an example session.

Considering the complexity of having a three-fold system, Carbyne Jungle does an incredibly good job of laying out the rules in a way that makes sense. The rules are written for the stock rule format, with Strategic alternative rules peppered throughout. The Flip and Fight rules live their own section at the back of the book. Even with these 3 sets of rules the book is clear, with alternative rules strategically placed and noted.

Where I think the book really shines, though, is in the writing itself. The personality and humor of the writers make segments an absolute delight. In fact, when explaining the rules, in flavor text, and asides, a few of their comments had me laughing more than just a sensible chuckle. Learning the rules feels as though you’re learning it from a knowledgeable friend as opposed to a school textbook.

This system has a lot going for it, but really, there are three things that makes Carbyne Jungle stand out to me. Firstly, is the writing style. Although this might be more subjective, I liked the humor that showed in places you don’t expect it. Secondly, is the Tri-Forge Engine. Okay, I’m a sucker for alternate rules and House Rules, but I think the multiple similar rule sets will allow for many groups to customize the game to their own play style. Lastly, is the customization (if you’re into that sort of thing). Because, by the dice gods are there tons of combinations.

This product get’s a big ‘ol seal of approval from Roll4! You can grab Carbyne Jungle from Drive Thru RPG today! Not sure if you want to commit to the full version? Try the Pay What You Want version!

Liked it? Take a second to support Steve Rakner on Patreon!